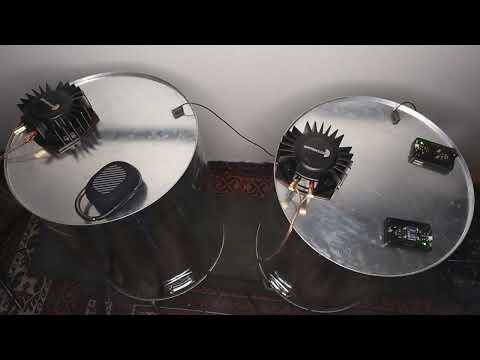 This library has involved a deep dive into a particular form of feedback: PARTICLE FEEDBACK
By using a technique of feedback between a transducer (vibrational speaker) and a contact mic, a resonant body becomes an oscillator, via excitation of its surface. As a simple example, here is a particle feedback set up using the thin metal skin of a trash can as a feedback oscillator: Any vibrations on the surface of the trashcan are picked up by the contact mic in the PeizoThing. These vibrations are amplified and feed a transducer and as the gain increases, the metal surface begins to oscillate.
But any variation in pressure or placement will alter the harmonics of the feedback, and equally if any form of interference is introduced to the surface (via shaking, moving, percussive impacts, friction, rolling objects) then the feedback reacts and transforms. It sounds extraordinary, but polyphony awaits! As you can see, we now have four feedback paths. Three of these are immediate to the surface that the PeizoThing is touching. But these three particle feedback oscillators are not static, fixed frequencies – they are interacting with each other, the surface of the drums AND the room acoustics. But there is also a fourth feedback loop via a Bluetooth speaker, which introduces both cross-feedback, sending from the left rototom to the right, and time delay inherent when using Bluetooth.

Rototoms and Timpani are useful for these experiments as drum skin tension is easily tuned using the built in drum tuning mechanism. In the video above at 34 seconds, you can see me slightly turn the right rototom to tune it, and you hear the beating of detuned feedback slow, and then unify.

Now the exploration gets deeper, metaphorically and literally, with the introduction of Bass Shakers. These are like sub-subwoofers, which generate very low frequency vibrations (eg some gamers attach them to their seat, to simulate tyre friction in racing games) All of the recording for this library was captured multitrack, first capturing the acoustics with a pair of MKH8040. But every recording is also captured by a pair of Trance Audio Inducer contact mics, and it is their signal that is used to feedback to the bass shakers. The interaction between all of these feedback paths, each with their own relationship to the surface and room acoustics, leads to some very interesting sounds!!

Of course, acoustics still plays an important role: as these physical bodies create sound, their feedback is also influenced by other tones and feedback existing in the same room, and it is often the tuning of feedback that leads to interesting sounds. At times the lag as one oscillating Timpani swoops and dives in pitch as it seeks to follow the dominant frequencies from another louder Timpani is beautiful and organic, with hypnotic beating tones.

The sustained tones and harmonic drones in this library are a rich source for tonal use, along with granular and spectral processing. Ranging from pure tonal beauty through to harsh panic-inducing tones, the multitrack capture of these sounds allows vast scope for unique sound design, whether its scifi, psychological score-like tones and textures or more unexpected uses for the multitude of short phrases, squeals, shrieks, and howls. Unique electronic character vocals (alien birdlife? R2D2 on bad acid?) UI bleeps, alarm sounds, tonal pings, and sting elements.

At one point I had a setup that made this giant stainless steel trough feel like a living, breathing machine! The bass shakers were being fed with a 300W power amp and I had them turned up enough that just a light ‘tap’ on the metal surface would cause a rumble feedback swell. So when I added the PeizoThing, it would initially latch on to a high frequency harmonic, and with minor tweaks would alter pitch until they generated enough vibration that the Bass Shakers would ramp up… But their vibrations were enough to move the Peizothings and momentarily interrupt their contact with the surface. Then slowly they would start to feedback again, and the cycle would repeat.