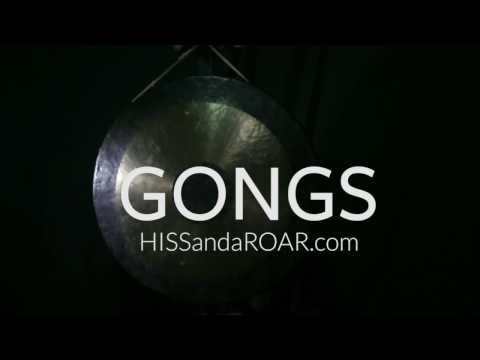 Hell no – dong is just the beginning.. watch the vid!
We've been experimenting and recording a total of 14 Gongs, and over the last three months have extracted some haunting and visceral sounds. We started off with percussive articulations using a wide range of mallets. Then we moved on to extended techniques involving friction mallets, superballs & contact mics, eventually arriving at a sound reminiscent of a bear with a sore head, a whale with indigestion…
or maybe just Chewy with an epic hangover…

You might think you know what a gong sounds like, and so did I when I started recording this library….
But after experimenting with some new techniques, the sounds produced reminded me less of a gong, and more of a bear with a sore head – I was not expecting creature vocal elements from these sessions but thats exactly what appeared in front of my contact mics.

In total we captured three giant TamTams (and frankly went a little crazy waiting for the 45 second decay) 4 Thai gongs, each with beautiful pitch, followed by a set of 4 Chinese Opera gongs (which do a very strange, natural pitch bend up). Lastly we captured 2 Vietnamese gongs, plus a resonant mini gong… Oh and one crotale… why? Because it was there!

A range of mallets was used with each, along with brushed textures. The final experiments involved hanging each of the gongs and spinning them on their axis – the complex doppler tones produced are simply gorgeous. The final result is an inspiring 12GB library of highly malleable sounds, rich with potential for many evocative aspects of sound design.