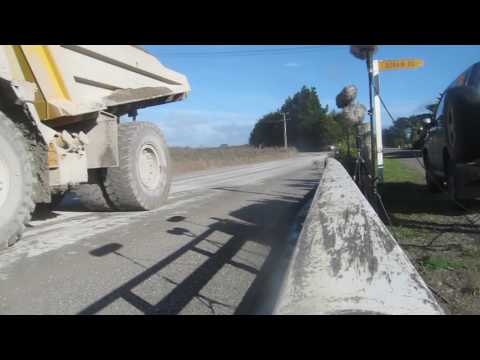 I recorded this library while I was staying on the West Coast of the South Island, near Westport, to record the BIG SURF ambience library, back in 2013. I had rented a holiday home that I thought was fairly remote and quiet, but the first morning was woken by a rumble… staggered outside to discover these enormous trucks passing by.
They were carrying huge loads of rocks from the open cast Stockton coal mine, so in one direction they would be fully loaded and on the return trip empty. At one point the mines private road crossed the main highway, which meant these huge trucks had to stop while gates were lowered.
I suddenly realised I could capture an interesting range of ‘performances’ so I set up my microphones and recorded an hour of passbys.

The next day I drove up the highway and after climbing over a fence & placed my microphones so as to record nice clean passbys. My recording did not go un-noticed, each of the truck drivers would give me funny looks and eventually their boss pulled up in a 4WD, and asked “What are you doing??”
I think he was worried I was noise control, but after I explained he invited me to visit the mine as all of the trucks would return there at lunch time, and leave again after lunch, which would enable me to record moves such as up & stops, and start, idle, away…
I was very thankful and went & bought a few dozen beers to leave with them in appreciation. But even better, they let me come back the next day to record some blasting they were doing at the mine! But that is a story for another day…. and another library!