Very pleased to have FX012 PLATE SMASH finished & released! The library was a request from a game sound designer, for a new project (so they received a free copy of the finished library!) Having spent so much time earlier this year smashing glass I instantly liked the idea and headed to my favourite local recyclers TRASH PALACE to see if they would let me buy a stack of plates… I filled two record crates with plates (as per the two you see at the start of the video) and rigged my studio for recording, gain staged my microphones, and began experimenting with methods of smashing the plates. 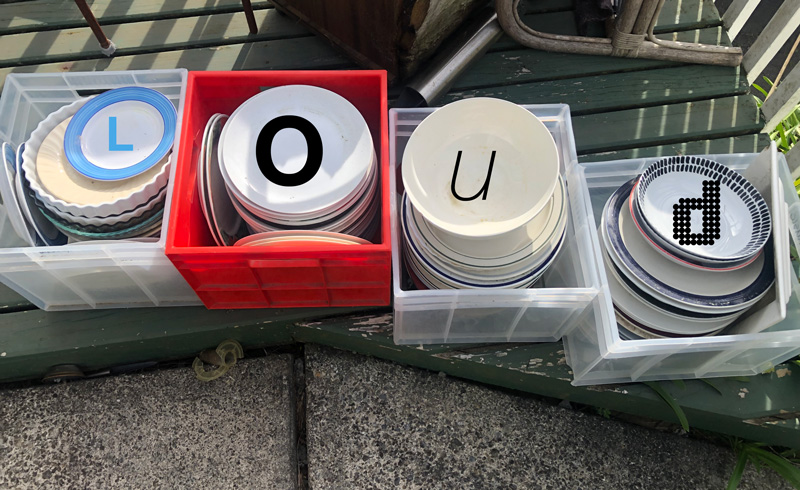 As I performed smashes I paid attention first to how the initial impact break sounded, and secondly to the debris and shatter. What became apparent was that even identical plates, smashed in the exact same way each time varied, and not by small amounts. The exact same plate smashed the exact same way sometimes sounded massive but other times sounded like a tiny cup being broken. I also came to realise that once the structural integrity of the plate has been broken that the plate is only useful as debris: there was no chance of two takes from the same prop!

The primary means of smashing I used at first was (1) throw at cinder block (2) throw at a flat concrete paver (3) hand-held hit with a heavy metal hammer (4) throw at large heavy wooden mallet. By the time I had smashed the first crate of plates I was already planning the next sessions. 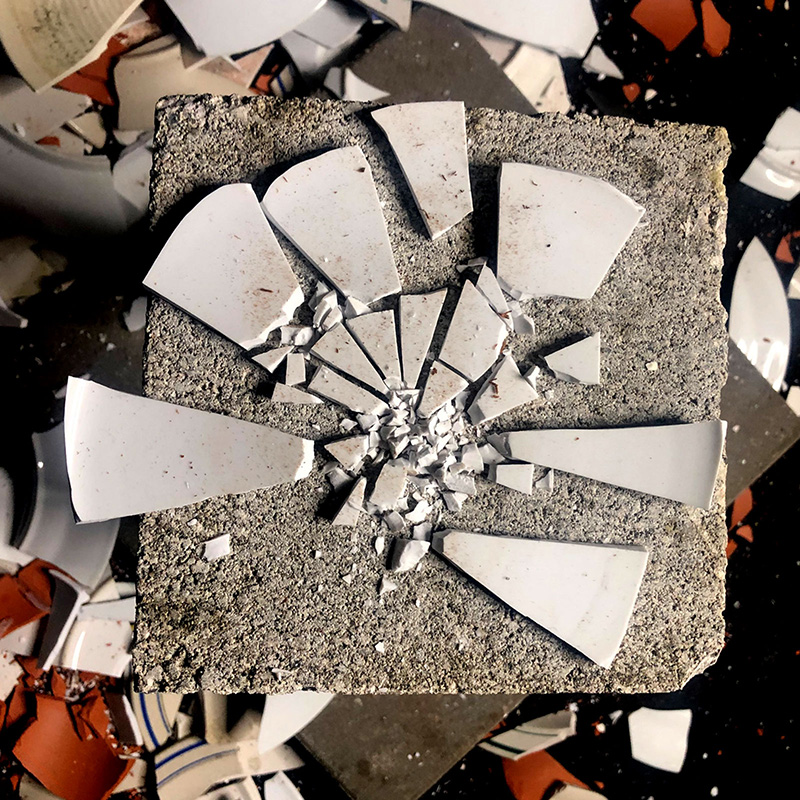 The tonality of the plate debris was also noticeably different from glass. While glass soon disintegrates into tiny pieces, a plate might break into 25 pieces but some of the bits would remain quite large. I figured these would be useful later, for a dedicated debris recording session.

But before I could get back to TRASH PALACE to get the next batch of plates, NZ went into total lockdown due to the first community case of Delta variant of COVID. Level 4 lockdown meant no leaving home other for essential supermarket shopping or exercise. Three weeks later COVID was contained with the boundaries of Auckland city and the rest of NZ was released into Level 3 lockdown, which meant I could go plate shopping again!

This time I took four empty record crates and filled them with a wider variety of plates. Selecting some that were pottery, some that were dinner pudding plates or bowls, others that were smaller in diameter.

The first session with the new selection I decided to record outdoors. I knew the exterior would sound ‘different’ and that debris would be able to fly in every direction. But it wasn’t just for variety I wanted to do the exterior recording. I also wanted to verify with my own ears that I was not losing any significant aspects by recording indoors.

After waiting for a quiet windless day and smashing my way through the first crate of exterior recordings, I loaded up the new recordings and compared the sound. The debris disappeared faster but I was happy with the sound from my dampened record room, so it was back to the studio for the next 3 crates.

Now I figured, anyone wanting a plate smash sound may also want elements to layer and one that immediately came to mind was the ‘ding’ of a plate being hit, without breaking. As with previous props I tried recording hits with a range of mallets, while the plate was sitting on soft foam and on denser foam. The sustain was good but I wanted more variety, so next I used some bungy cord and suspended a single plate so it was free to spin and move. Much better sound, and a hit when a plate is really spinning has interesting stereo movement which could be useful as part of a composite plate smash. So I selected ten plates and bowls of different sizes and which each had a discretely different pitch. Next I captured single plate ‘dings’ and slowly escalated the force I used to both spin the plate and to eventually smash it. 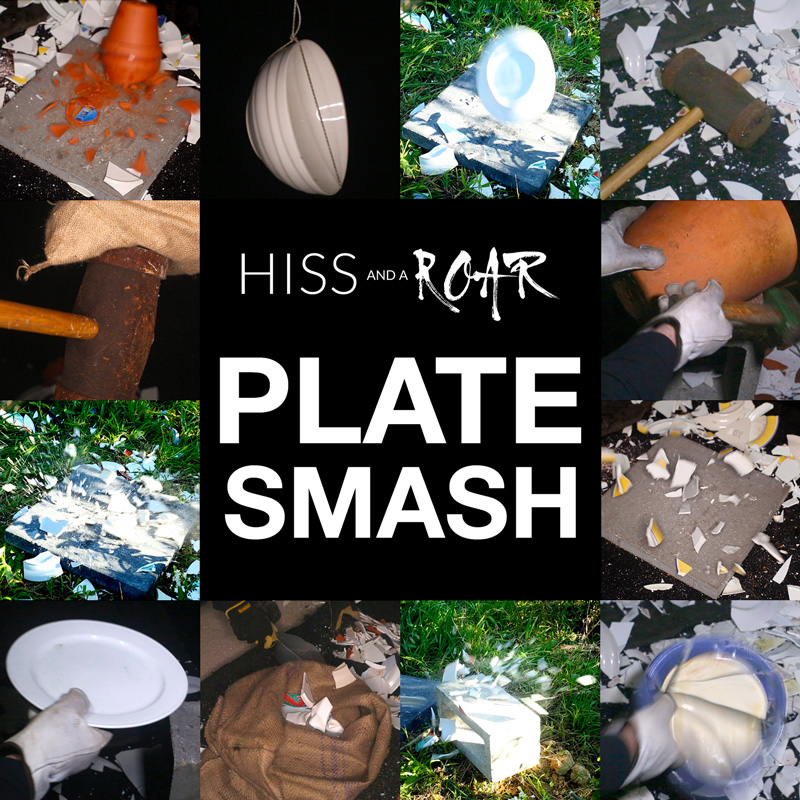 Eventually I came to the end of all the plates I had sourced – six record crates full, so I was left with a mountain of debris. I recorded a few single debris drops on to concrete, and then sourced some hessian sacks, which I figured would be quiet enough (don’t want rustles particularly) as well as structurally strong enough to not be sliced open by the plate debris.

I recorded drops of single pieces into one sack until it was quite full, and then captured movements and hits with it until my arms ached. Next, I suspended it on bungy cord and smacked it with a big wooden mallet amongst other tools, the impacts sound really interesting and surprisingly at times like very complex armour, and at other times like a sack of gold coins! I love finding useful elements in unexpected sources since when layering sounds it is often the obvious choices that get used first. Finding an applicable element with a unique tonality is very useful.

I emptied that sack out and got another smaller sack & filled it with only a dozen plates shards and performed some moves with it, achieving a lighter and more varied clatter of pieces due to the free space for movement.

If I was tasked with making designed plate smashes apart from this library I would likely also use elements from the GLASS Practical library (some of the bottle smashes could be useful for mid/lower freq) and possibly even some elements from VEGE VIOLENCE and some from BODY HITS. But even just this MiniFX PLATE SMASH library has enough range of material to achieve the task and lots more beside.

No cuts, and no damage to any humans = a successful recording project!

Posted on October 1, 2021 by Tim Prebble in Uncategorized