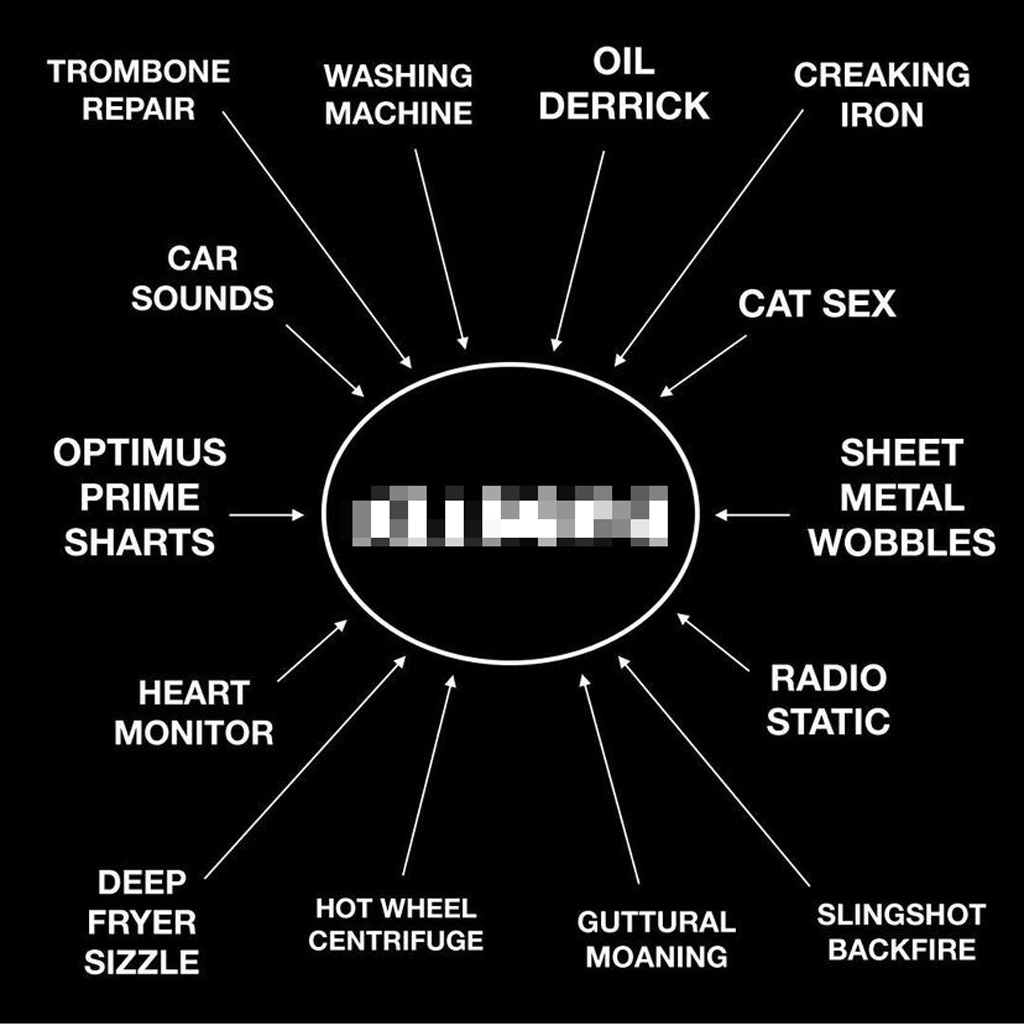 I de’Meme’d this meme by removing its target…
But TBH I’d quite like to hear it! 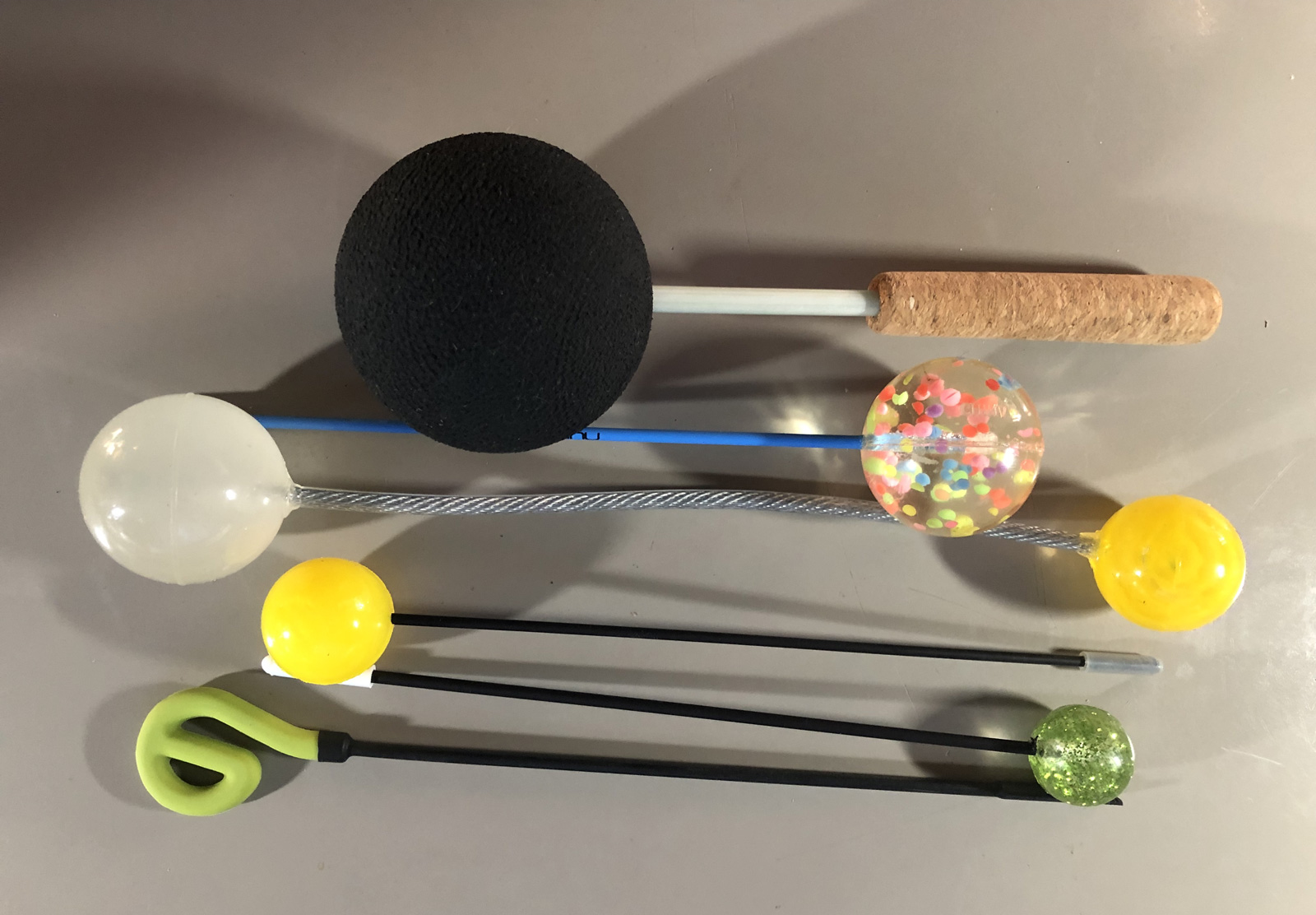 Cannot wait to try these new friction mallets that just arrived!
The big bass one is quite heavy, purposefully…
Intrigued to see if I can generate intervals with the double ended one. 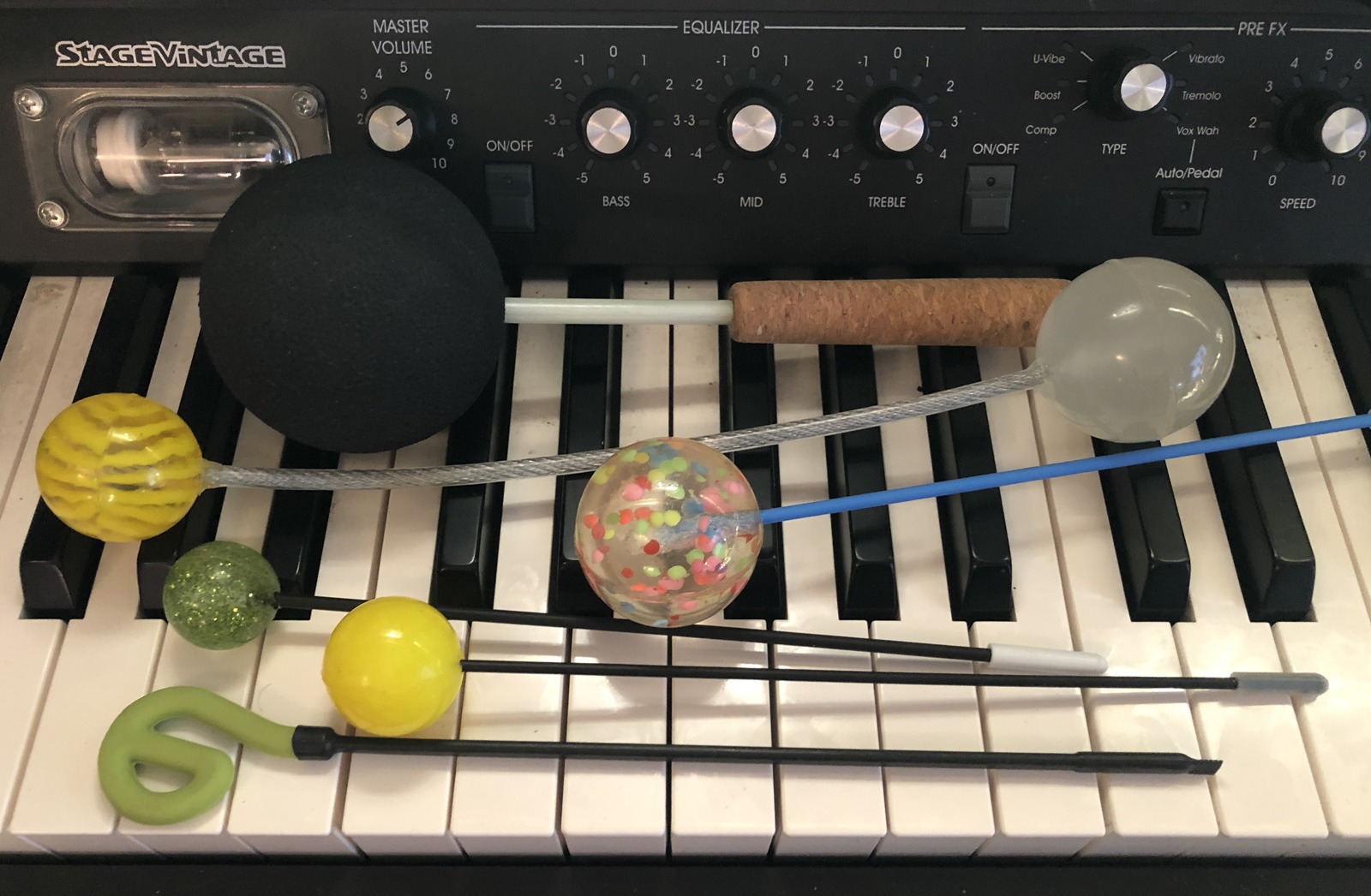 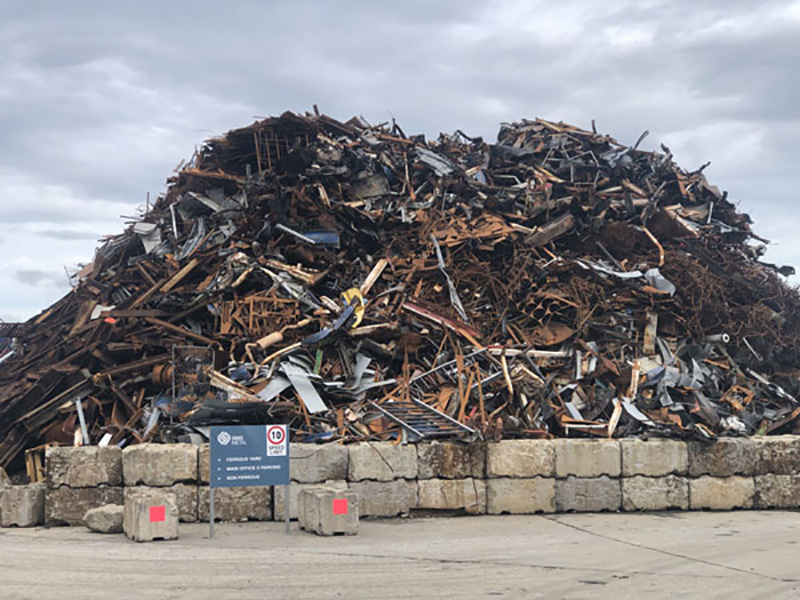 I was reminded of an invaluable #fieldrecording skill when out scoping locations this week. I found this large scale metal recyclers in Seaview, and walked into their office to ask if there was any way I could access this mountain of metal to record sounds or buy a few props?
THEM: “I’m sorry, we’re corporate and don’t sell to the public. And health & safety regulations mean we can’t let you on the property”
ME: “Oh thats a shame… Hey so what happens to all of this metal anyway?”
THEM: “A ship is arriving September 2nd, so it will all be taken away for recycling”
ME: You don’t say!!
THEM: “We do say!”
ME: So if I turn up on September 2nd and set my microphones up just outside your boundary, I will get to hear that entire mountain be loaded and removed??
THEM: “Um… yes that is correct”
ME: See you then!

The skill?
Refusing to take no for an answer!
Had I not persevered and asked that one extra question, I would have gone home thinking what a missed opportunity it was. But now I can prepare, and will likely go record a few days before incase they start loading early, and to find the best location. And I will stalk the Marine Traffic website days before, to identify the ship and its arrival date. But all of this will only be possible due to persevering and asking the right question! And the right question is one that they cannot say no to!

But the next skill required?
Perseverance!

Based on the above info I loaded up my car with all my recording gear & camera and visited the site last Thursday, thinking they might be preparing for loading… But there was very little activity.

Friday September 2nd arrived and same scenario! Very little activity. Was the ship late? Were they kidding me?

Monday 5th I revisit and they are doing some work in the back of the yard, so I set up my mics and record what I can… I don’t hear anything extraordinary, but it was useful as a test run: 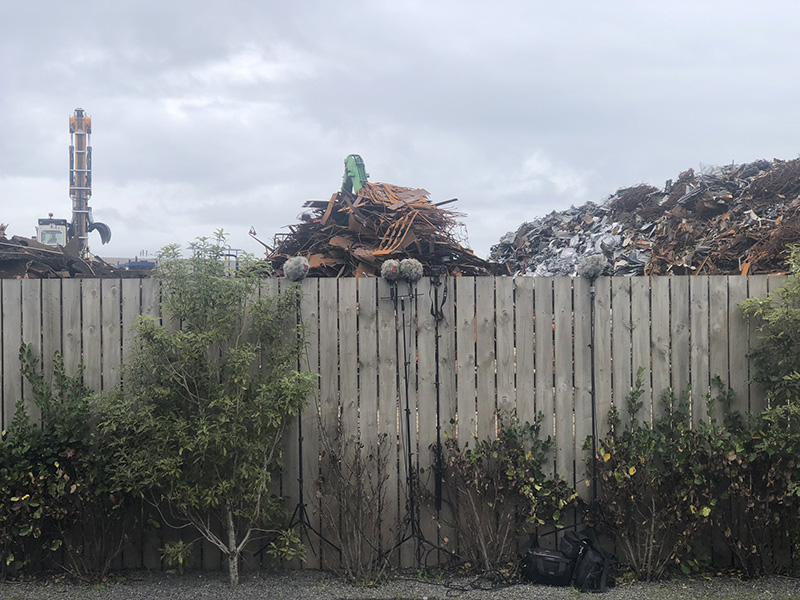 Notice in the photo above, none of my mic stands are actually touching the ground! They are functioning as a counter weight to keep mic mics sitting on top of the fence. But framing & focusing the camera was impossible. I came home at the end of the day and the recordings sounded better, but the video was not great.

Tuesday 6th I am better prepared! 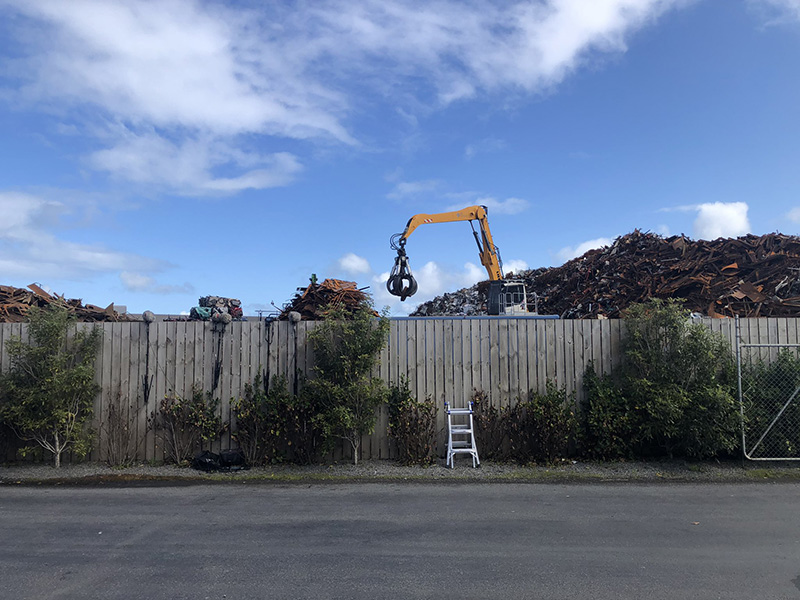 Notice my little stepladder! Standing on it I could clearly see over the fence and as luck (aka perseverance) would have it, a big truck was being loaded almost directly in front of my microphones!! 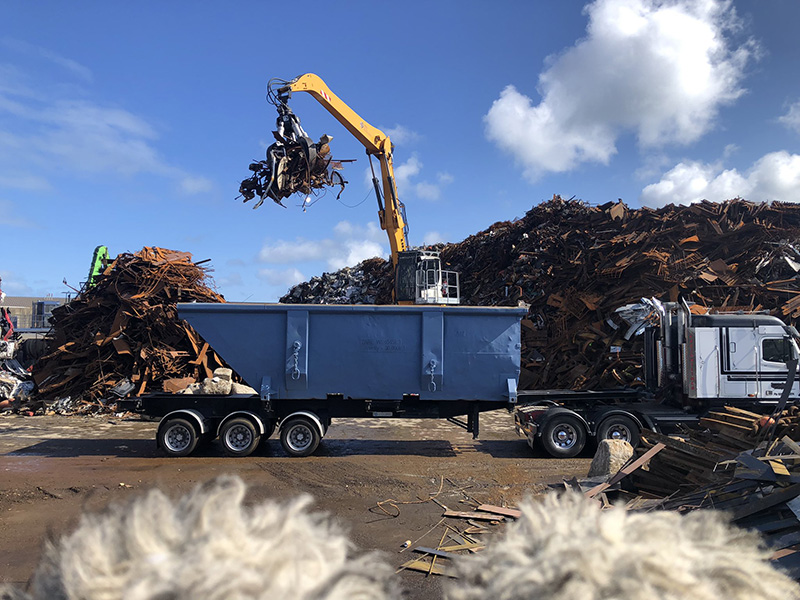 It would take them about 15minutes to load each truck, and the first few dumps into the empty bin sounded HUGE!!! While the truck was away unloading into the ship, I thought the claw might take a break… But no, he started making metal avalanches in prep for the next truck to arrive!

So today I am heading off for another recording session as I figure they have another day or two of work to move the entire mountain. And now that I have my setup safely organised, I’m going to add the Sanken CUX100K mics to the 8040×2 and 8020×2 that I have been using!

Thank Jah for 32bit float!!
I shot some XPAN from my little stepladder too 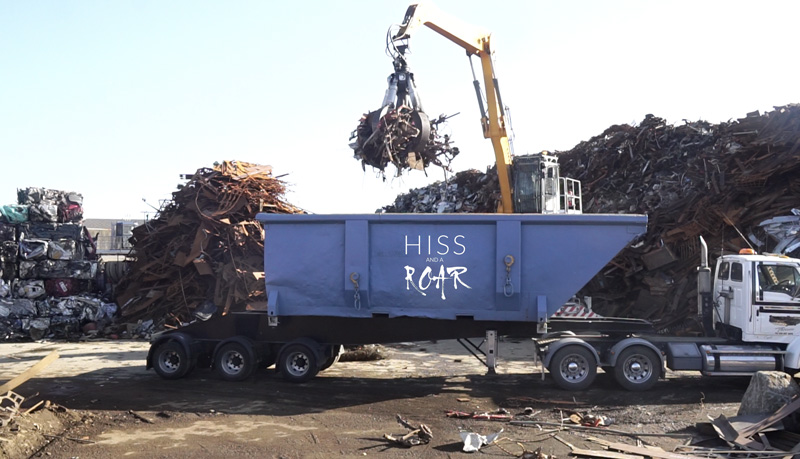 This supposed feature of OSX has annoyed me ever since Spotlight was introduced!
The problem: FIND became dysfucntional.
For example: I want to find a drone shot I labelled as “TREE 360”
I hit cmd F, type “TREE 360” and OSX is USELESS!
It finds every occurrence of any of the words in anything eg inside emails, PDFs etc..
I have hated this feature and actually installed NeoFinder to try & solve this.
NeoFinder scans your HD and creates a database of filenames.
Handily it works with offline HDs too, so perfect for searching offline archive drives.

But today I learned how to fix OSX FIND permanently!
This article explains how

Here’s a step by step:
#1: Open System Preferences
#2: Click on “Keyboard”
#3: Click on “Keyboard Shortcuts”
#4: Click on “Application Shortcuts” (on my system this was the last item located on the left-hand side window)
#5: Click the little “+” right below the right-hand side window
#6: Click on the “Application” menu and choose “finder.app”
#7: Click into the field “Menu Title:” and type “Find by Name…”
(Type it exactly like that including the three dots. Don’t type the quotes BTW.)
#8: Click into the field “Keyboard Shortcut:” and press the command-key and F at the same time.
It should look like this ⌘F
#9: Close System Preferences

That’s it. Basically what you are doing is remapping the command-F key (⌘F) to “Find By Name”.

As you may know, LOMs products often sell out in minutes. I had been waiting, patiently hoping that LOM would do another run of their Priezor EMF Sensor for years, and had all but given up when a FB comment (thanks Shaun!) mentioned that LOM products were open source, with full build docs available on Github!
I had a look at the instructions and realised I could easily build a Priezor, step 1 was ordering the parts: some copper wire and small bolts, spacers & nuts. Step 2 required laser cutting acrylic for the frame, which I had done previously with Ponoko.com when I had them laser cut Daxophone tongues from wood and plastic.
But one minor issue I ran into was that the dxf file for the parts had been created with all parts stacked in layers. Ponoko require a single layer with no overlaps so I reorganised the dxf file and ordered enough parts for two Priezor sensors. But I also thought it is silly if every person who wants to make a DIY Priezor has to rearrange the dxf file, so I contacted Jonas at LOM and gently requested he provide an updated dxf, with all parts laid out flat with no overlaps.
Last Friday he updated the LOM Github with a new A3 size dxf file, which makes ordering laser cut parts simple!

So I ordered the parts and this arrived: 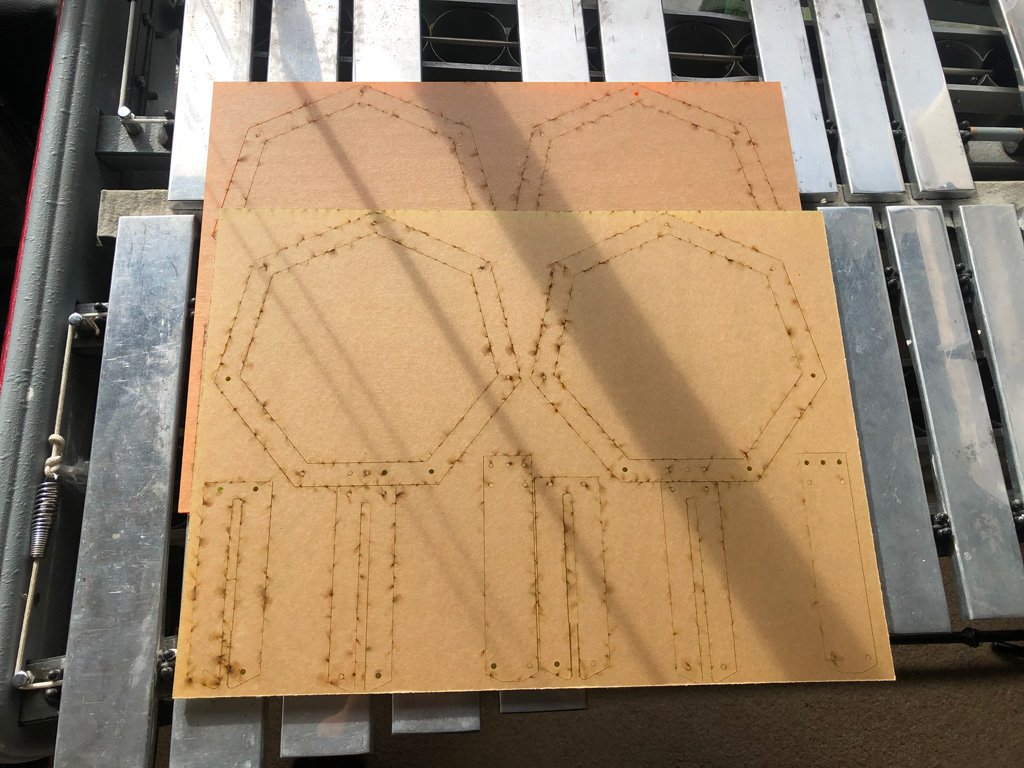 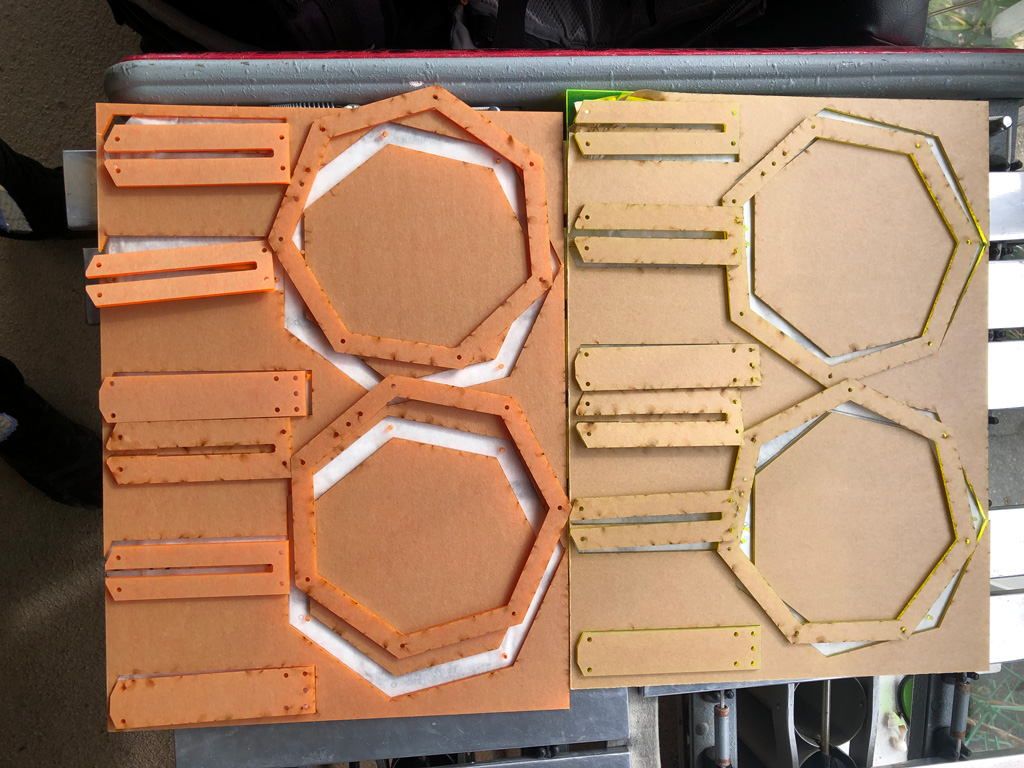 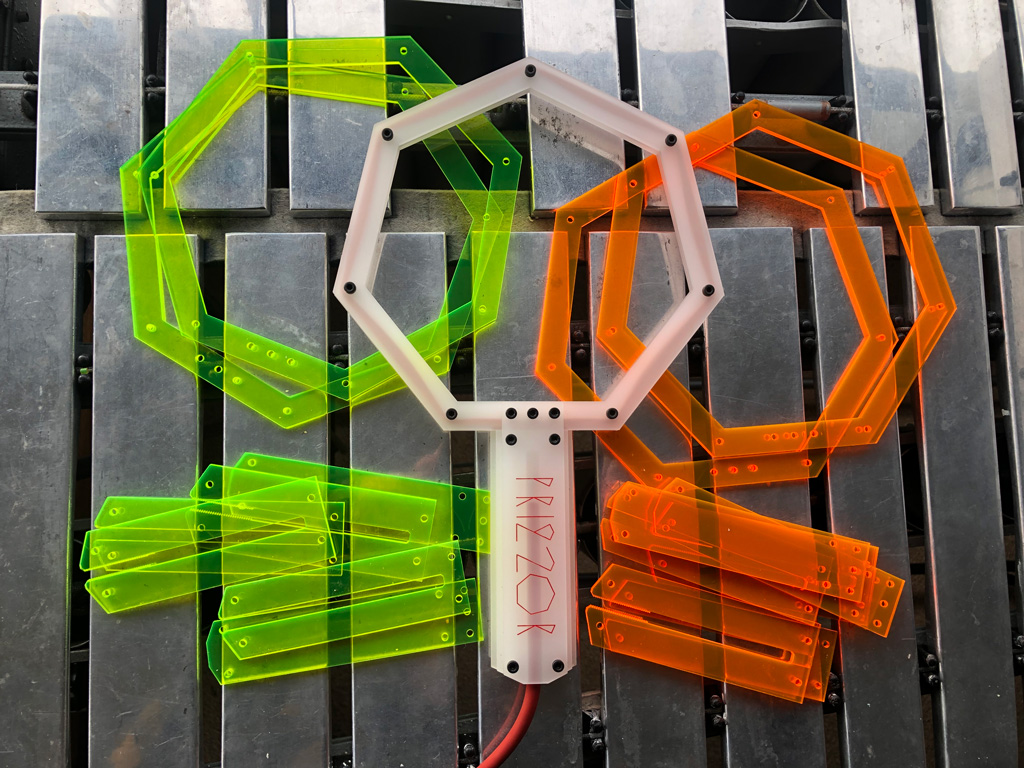 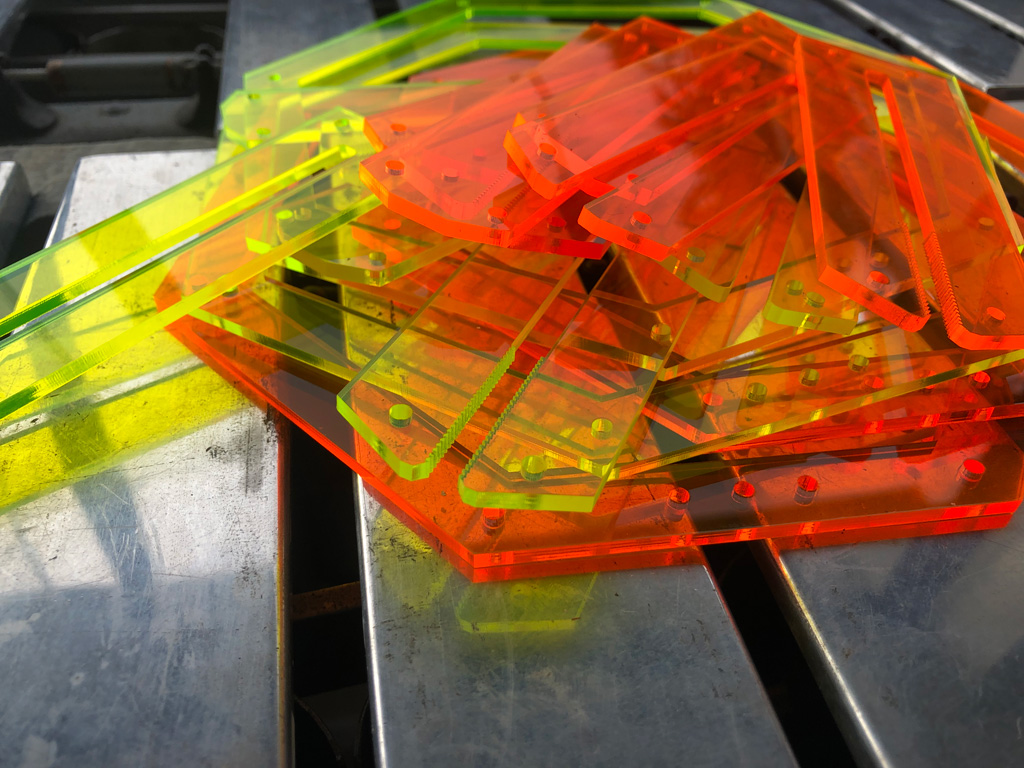 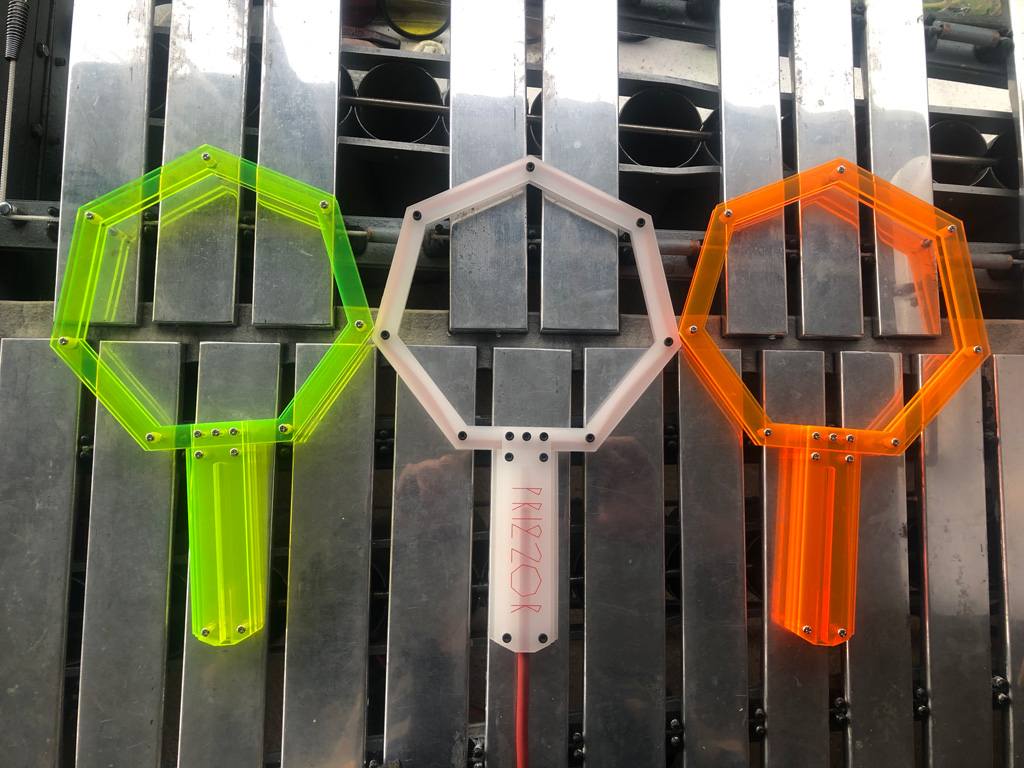 Next to wind the coils…